Today I’d like to welcome back Kai Strand. I’d have to go back and check to make sure, but I think she now holds the record for the most frequent guest here on authorericprice.com. I’m not sure what more I could say about her. She writes fun middle-grade and young adult novels, and I understand she’s going to be trying her hand at adult soon. She’s also the mastermind behind the Lightning Quick Reads blog. If you haven’t checked that out, you should. So here she is with the cover to the third book in her Super Villain Academy series. Of course I recommend it too. I intended to have reviews of books 1 and 2 ready before this cover reveal, but I failed. I guess Kai will just have to come visit again in a few weeks. Oh yeah, and there’s a giveaway.
Being good isn’t so bad – oh, but it’s so good to be bad.
Excerpt from Super Bad:
Source stepped in front of her, balancing on the edge of the curb. He grasped her shoulders and stared her straight in the eye. “Everything, everyone, will be all right. You have to believe that, Sandra.”
Tears flooded her eyes again. She hated that she didn’t believe him. “I’m scared, Source. I’m afraid Whisper will never wake up. Or that I’ll never walk right again. I’m worried about Mom’s state of mind. I’m scared the world will never right itself, and all this violence will become the new normal.”
Source drew a ragged breath and lightly dragged his thumb across her tear-stained cheek.
Closing her eyes, as though afraid to see the full truth, she whispered her biggest fear. “I’m scared we’ll never find Jeff.”
SUPER BAD The unexpected conclusion to the Super Villain Academy series. 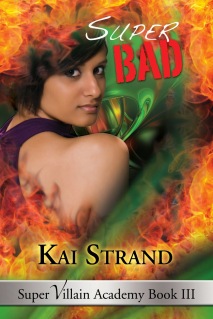 The world is in chaos. Violence and thievery reign. And with the supers still balanced, it’s only getting worse. Without good versus evil, the supers care less and less. In order to restore purpose, the world needs its super heroes and its super villains, but the one who balanced them in the first place is missing.
Sandra’s concern over finding her brother, Jeff, isn’t her only problem. Her pathetic excuse for super powers has left her needing a new ankle. And though she’s still very much committed to her boyfriend, Source, she’s growing unreasonably attracted to Set, the boy who double crossed Jeff by stealing his girlfriend.
When Sandra is taken and held as bait by kids who want to unbalance the super world, it becomes the inciting event that changes things for supers everywhere and forces them to answer the question, “Hero or villain?”
***
Super Bad is scheduled for release in June, but there have been whispers of it releasing sooner. Don’t miss out. Subscribe to Kai’s mailing list and be among the first to know.
***

King of Bad – Jeff Mean would rather set fires than follow rules. He wears his bad boy image like a favorite old hoodie; until he learns he has superpowers and is recruited by Super Villain Academy – where you learn to be good at being bad. Is Jeff bad enough for SVA?
Polar Opposites – Heroes and villains are balanced. After Oceanus is kidnapped, Jeff learns the supers are so balanced, they no longer care to get involved. Ironically Jeff’s superpowers are spiraling out of control. Will they find Oci before he looses it completely, and will they find her alive?
***

Win a $10 Amazon gift card or an ecopy of either King of Bad or Polar Opposites. Plenty of chances to win. Open internationally. Enter here: a Rafflecopter giveaway 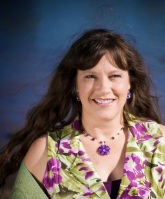 About the author: When her children were young and the electricity winked out, Kai Strand gathered her family around the fireplace and they told stories, one sentence at a time. Her boys were rather fond of the ending, “And then everybody died. The end.” Now an award winning children’s author, Kai crafts fiction for kids and teens to provide an escape hatch from their reality. With a selection of novels for young adult and middle grade readers and short stories for the younger ones, Kai entertains children of all ages, and their adults. Learn more about Kai and her books on her website, www.kaistrand.com. 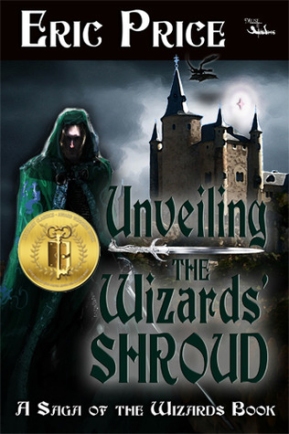 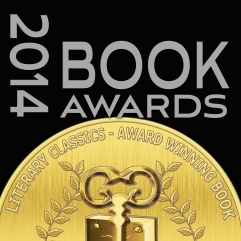 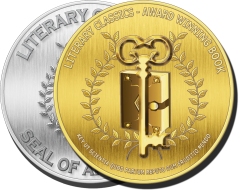