Two new books are available in time for the holidays. Well, one new book and a new version of an older book.

Unveiling the Wizards Shroud is now available in paperback. 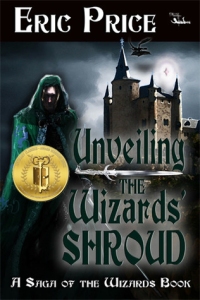 As the only son to King Kendrick, Owen despises the idea of being king one day. Magician may be the only career he’d like less. He has dreaded the days leading up to his fifteenth birthday, when his father will certainly declare Owen heir to the throne. But at the birthday celebration, his father falls ill. The only person in the kingdom that may be able to save him is a magician-the very same magician Owen holds responsible for the death of his mother.

Owen and his companions will have to travel the continent of Wittatun in search of the cure for King Kendrick. On the journey, they will battle strange beasts and harsh climates, befriend extraordinary magicians, and meet a dragon before returning to Innes Castle-where much has happened in the days since they departed.

Paperback available for $9.95 from:

eBook available for $5.50 from most retailers; on sale for $2.75 (USD) from Amazon and Muse It Up Publishing:

Muse It Up Publishing

Coming November 26, The Squire and the Slave Master: Saga of the Wizards: Book Two. It’s currently available for pre-order at the special price of $2.99 (regular $4.99) from select vendors with more to come. Currently an eBook only. 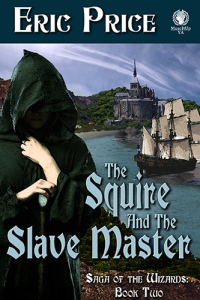 The award winning Unveiling the Wizards’ Shroud (CLC’s Best First Novel 2014) chronicled Yara, Owen, and Cedric’s quest to revive King Kendrick from a dark, magical spell. After the adventure to save King Kendrick, Yara’s everyday life has grown monotonous. The dull work of learning her father’s blacksmithing trade and the pressure from her parents to decide what she plans on doing with her life has her nerves too stressed.

Lucky for her, a surprise messenger from the castle brings the king’s request. She’s to join a collaborative mission between the Central and Western Domains of Wittatun to stop a recently discovered slave operation in a land to the west.

It’s imperative she keep secret not only her magical abilities from any possible traitors, but also her gender. The people of the Western Domain have a superstition prohibiting girls from sailing. But a chill wind carries the distinct odor of sabotage. Can one girl survive to destroy an evil rooted much deeper than mere slavery?

Amazon
Muse It Up Publishing

One response to “Exciting Book News to Start the Holiday Season!”